Way back in 2004 Greg Lemond was working on his autobiography with a great sense of urgency, certain that Lance Armstrong was about to be unmasked as a doper, a revelation Greg believed would kill-off interest in bike racing in the US, and consequently hurt the book’s sales.

Way back in 2004 Greg Lemond was working on his autobiography with a great sense of urgency, certain that Lance Armstrong was about to be unmasked as a doper, a revelation Greg believed would kill-off interest in bike racing in the US, and consequently hurt the book’s sales.

All Armstrong’s major rivals, Pantani, Ullrich, Basso, Zülle, had problems with medical controls or were implicated in blood-doping. There’s another list of riders – Heras, Hamilton, Landis – who rode as Armstrong’s team-mates, departed to fend for themselves, then tested positive and were busted.

As circumstantial evidence mounted an ominous question grew ever-more pressing. How – in an era when ‘scientific preparation’ was assumed to be widespread, sophisticated and systematic – did Lance Armstrong manage to dominate the World’s biggest stage race without ever testing positive? For years the most likely explanation seemed that Lance had sold his soul to the devil. 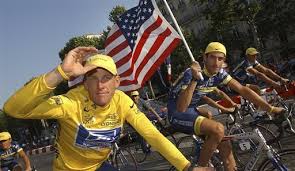 In 1967 Jacques Anquetil broke the hour record, for the second time, covering 47.493 km in sixty painful minutes. The achievement was never ratified as he declined to give a sample to the medical control. His morally rigourous position – measure the track, check the watch but I am a professional, how I prepare is between me and my doctor – was echoed recently, in reference to l‘affaire Armstrong, by Malcolm Gladwell. They’re all on-it, why not make ‘scientific preparation’ another facet of the sport?

Professional sport is never fair. Ever wondered why Ben Johnson ran for Canada not Jamaica? Cycle-sport – a product of the industrial age with no idealised pre-history – is least fair of all, it’s whole point, the employment of technology to increase human performance.

Coca-cola sponsored the Tour-de-France while it’s main active ingredient – caffeine – was on the list of banned substances. It’s legal to sleep in a hypobaric chamber or train at high altitude but stockpiling your own blood for re-transfusion is forbidden. Sport needs rules, and cheating is bad, but the line between ‘positive’ and ‘clean’ is essentially arbitrary.

Anquetil died of stomach cancer aged 53. The real issue is harm reduction. It’s not good for athletes to dose themselves with the latest medical developments simply to keep up in a pharmaceutical arms-race; but harm-reduction and cycle-sport have a problematic relationship.

Racing bikes is dangerous. A career racing bikes is only for people who’ve made their peace with mortality. As Sean Kelly put it: “You don’t think about hospital you think about winning.” Who now cares if Casartelli, Kivilev or Weylandt were riding clean?

Armstrong’s case has a further complication. His fanatical interest in pharmacology began in desperate self-preservation. Without medical technology the self confessed ‘cancer geek’ would be dead and wouldn’t have won the Tour de France even once.

When David Millar – who was once ‘good’, then became ‘bad’ and is now widely considered ‘good’ again – states emphatically that; “there’s no way Bradley Wiggins isn’t clean” the first reaction of an informed listener can only be…

“…Yes David, but you used to say that about yourself before you got busted.”

The question – ‘Is he clean?’ –  has importance but only becomes preeminent in the shallow and chauvinistic reading of sport, as morally-uplifting. The true fan must ask rather: ‘Is he entertaining?’ ‘Does he put on a good show? The final judgement on the Armstrong years is not that they were corrupt or evil, they were just a bit less interesting than they might have been.

Sport’s unique selling point is that the outcome is supposed to be unpredictable. King Lear may be dramatic but if you’ve seen it once you’ll never be surprised by its denouement again. The one thing large organisations of all stripes – from Nike, Inc. to the Communist Party of the People’s Republic of China  – have in common is a strong dislike of uncertainty. 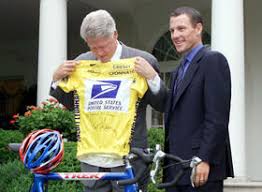 Lance cultivated powerful friends and allies; associates who wanted some of his glory, his manifest personal power, reflected on them.

These individuals and organisations all understand that the difference between good and evil is not so important or clear as the simple-minded narratives they offer us. One reason Lance stayed ‘good’ for so long is that – even when evidence to the contrary was starring them square in the face – a lot of powerful people and organisations wanted him to be.

Bicycle road racing – the true monarch of sports – has no moral value but it’s worthy of study; full of parables. Is Lance villain or victim?